TODAY, IN HOT DOG COURT: Little seven-year-old Pierre Chien Chaud, of the oppressed and ostracized Chien Chaud family, was finding refuge under a tree whilst he tinkered on his lute.

“Pourquoi, I wondehhhr, pourquoi eet eez I who have been tasked to lead my childhood motorcycle gang,” he pondered. “My peers, zey simultaneously fear me as such a leadeahhhr and also chide me for my French heritage. Eet eez truly a paradox.”

And thus Pierre mused on the nature of paradox for three days and his family began to wonder where he was, though he sat, so calmly and musically, pondering the mysteries of life in the shade.

Of course childhood friend groups are complex hierarchies forged on the steam of churning jealousy and fear. Pierre’s raw, James Dean-like power over women (okay, other seven-year-old hotdogs) was what propelled him to the top. But once he was there, ruling the moto-gang, dispersing his hip-ness and tortured-artiste-ness over the other three and their mo-peds (okay, they were mo-peds, not motorcycles…), each of the other boys began to wonder: 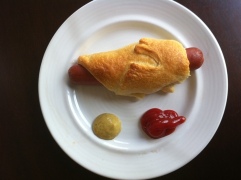 Why not me? Why can’t I be the one leading this group instead of Frenchie McFrencherton? Who does he think he is, clothing himself in a stylish toga of puff-pastry?

What was possibly the most interesting and conflicting characteristic of Pierre, though, and what neither the other seven-year-old hotdogs nor his parents knew, was that Pierre was able to have two entirely separate trains of thought at the same moment.

And yes, as he luted and pondered the nature of paradox with one part of his brain, the other was fully aware of the growing antipathy towards him as a leader and perhaps as an individual who was alive. That other side of Pierre was planning a meeting of the motorcycle club that the other small hotdogs would never forget. Not even his little girlfriend, and moto-groupie, Cherice, NO not even that hot little number, would be spared from his twisted pre-emptive sausage strike.